THE PELICAN INTERVENTION FUND: One Local Response to the Growing Opiate Crisis

By Steven Keene and Elizabeth McCarthy 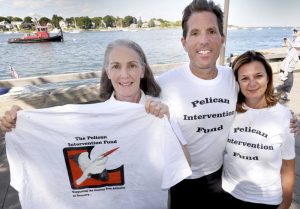 Kim and I first met “Corey” 15 years ago when we moved to Newburyport. He became friends with our son and was quickly “adopted’ into our family. He was a well-known, popular member of the community and high school. Corey was your typical Newburyport kid: clean cut, hardworking, and on high school sports teams. Imagine our shock and disbelief in late 2014 when one of his friends confided in us that, “If we don’t help Corey get off his drug addiction, he’ll be dead by the end of the year.”

We were stunned. Corey was just like other kids in our community, how could he be involved with opiates and heroin? Heroin’s in the dark alleys of inner city dregs, not possible in communities like ours. That couldn’t have been further from the truth. We knew of Corey’s occasional drinking in high school but never imagined this outcome.

We later learned that Corey had started abusing OxyContin after a sport injury, and then moved to heroin, as it was cheaper than pills. Corey left college due to drugs, and was in and out of detox facilities and couch surfing. We decided to confront Corey, told him we knew everything and wanted to help. Tears, refusals, set-backs, then ultimately acceptance, hope and recovery followed. This story is not unique; this story is unfolding in many individual lives today. This is the story of how the Pelican Intervention Fund (PIF) was created.

Addiction is an individual, family, and community disease, affecting all social classes, races, and genders. Our local communities, like many others in the country, are experiencing the destructive consequences of opiate addiction. In 2015, Essex County reported 165 deaths from opiate-related overdoses. Daily, reports of drug-related crimes, accidents, and sudden deaths from heroin overdoses can overwhelm us—yet there is hope.

The Pelican Intervention Fund was established in 2015 by Newburyport residents Kim and Steven Keene and Elizabeth McCarthy. The mission is to provide funding for residential Twelve Step-based programs for economically-challenged, adult men and women struggling with heroin and other addictive substances, who live within the communities of the greater Newburyport area. This includes Amesbury, Byfield, Groveland, Merrimac, Newbury, Newburyport, Rowley, Salisbury, and West Newbury. We function as a Fund of Essex County Community Foundation.

At Pelican Intervention fundraising events, young adults in recovery openly share their stories of descent into addiction, despair and loss of hope, and how they moved on to reclaim their lives. Neighbors, friends, and clergy gather to hear these powerful testimonials that demonstrate the power of long-term residential Twelve Step programs.

There are several options for recovery. Most begin recovery by entering a detox facility to remove and safely withdraw from drugs, followed by admission to a thirty-day treatment program, where The Pelican Intervention Fund supports recovery.

PIF funds Twelve Step-based residential programs, six-month or longer, in a Sober Living residence, where residents learn the necessary tools and live the values inherent in the Twelve Steps. There in the community, they rediscover hope, self-worth and purpose.

Many cannot afford the cost for this effective extended sober living residency. Six-month residential programs can cost up to $15,000. Unfortunately, most insurance plans won’t cover this long-term care. The Pelican Intervention Fund was established to support these efforts.

The Pelican Intervention Fund has raised over $45,000 and placed four clients in structured Twelve Step-based sober living residency for a six-month stay. Pastor Timothy Harrison and Rev. George Morin at the Immaculate Conception parish have been extremely supportive, and invited us to speak at Masses. Coupled with a community gathering and testimonial at Carry-Out Café, we raised over $3,000 in one weekend.