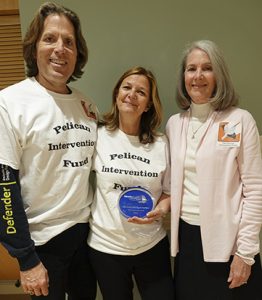 Published in The Newburyport Current

Opioid addiction is not just something you hear about on the news. According to the Massachusetts Department of Public Health, between the years 2000 and 2015 there were 1,435 opioid-related deaths here in Essex County. Back in the year 2000 there were 46 deaths, but in 2014 that number spiked to 213 and one year later, in 2015, the number rose even higher to 236 deaths.

The opioid crisis is touching local lives and in 2015, Newburyport residents Kim Keene and her husband Steven and Elizabeth McCarthy decided to do something about it. They established the Pelican Intervention Fund (PIF), which recently won the Greater Newburyport Chamber of Commerce & Industry “Nonprofit Business of the Year” award.

“This is a community award,” Kim Keene said. “We’re so humbled by the gratitude of the community.”

Dedicated to supporting local men and women on their journey from addiction to recovery, PIF is a non-profit, grassroots, volunteer group serving the communities of Newburyport, Newbury, Byfield, West Newbury, Amesbury, Salisbury, Groveland, Merrimac and Rowley.

PIF’s goal is to provide funding for 12-Step based long-term residential treatment for economically challenged adult men and women struggling with heroin and other addictive substances and living within the Greater Newburyport area.

“It happened through our personal experience,” Kim Keene said. “Our son’s best friend was struggling with heroin addiction. It was a long process of intervention and then we got him into a long-term residential 12-Step Program and he did very well. We saw the transformation in him.”

The 12-Step Program is a non-medical model based on the program used by Alcoholics Anonymous. It costs an average of $15,000 for the first three months and is not covered by most health insurance.

“We decided to look into establishing a fund to help other people,” Kim Keene said. “That’s how we met Elizabeth,” at a prayer group at Immaculate Conception Church.

“Our daughter is in recovery,” McCarthy said. “I am so grateful she is in recovery and I want others to have the opportunity to attend a 12-Step long-term residential program. Not only do they learn the steps, but they find support there, hope, purpose, and they begin to reclaim their lives.

“It’s reliance on a higher power, but that ‘higher power’ can be community. For some people it’s nature. It’s not necessarily faith-based, but for Kim, Steve and myself it flows from our religion.”

PIF is a fund of the Essex County Community Foundation (ECCF), which promotes philanthropy in Essex County by managing charitable funds for donors, providing grants and services to nonprofit organizations, and engaging in community leadership initiatives.

Addiction, especially to opioid-based substances has become an epidemic, death rates are rising. and it impacts a wide range of ages and socioeconomic levels of society.

“They (ECCF) are wonderful,” Keene said. “They really help us a lot. They manage all our money for us.”

“They learn accountability,” McCarthy said. “Slowly they have to begin learning to be honest, open, accountable, caring, and grateful. An attitude of gratitude is a big one. They heal at the roots. It’s more than being chemically sober. They are learning emotional sobriety.

“Recovery is possible but it takes money, it takes caring, and it takes time. We give them the time, the place, and the funding. They have to do the work, but they are not alone. They have the community.”

PIF has received, and continues to receive, the support of the Greater Newburyport community.

“We’ve received some grants from banks,” Kim Keene said, “but the bulk of it is individual donations from people in the community, who might be touched by this epidemic. Last winter a group of kids from Newburyport Youth Services had a hot cocoa stand for use and sent us a check for $38. It was so sweet.

“Last April I went to 40 to 50 businesses in the Greater Newburyport community to share what we were doing and it was incredible the response.”

“Everybody is giving of themselves,” McCarthy said. “We’re the messenger, but without them responding to the message we could not fund these people, 29 people so far. The youngest is 23 and the oldest is 53.

“When we talk with people it’s amazing the stories they tell us. Many have tried other programs and have failed. We believe in second chances. It’s so powerful, but it does take money.”

PIF is hosting several fundraisers, including one at Flatbread Pizza in Amesbury, and will be one of the beneficiaries of the 15th Annual Newburyport Chocolate Tour on Saturday, May 19. This summer, John and Carol Elwell of Maple Crest Farm at 102 Moulton St., West Newbury, will donate a portion of berry picking at a date to be determined.

For information on upcoming events, to make a donation, to volunteer, or to apply for assistance, go to www.pelicaninterventionfund.org.

“People often donate in memory of someone who died from addiction,” McCarthy said. “People need to do something positive with the pain that they have. Whatever your reason for helping us, welcome aboard. We can always use the help.”

Communities throughout Massachusetts and across the nation have been touched by the upsurge in opioid addiction, but Essex County has been particularly hard-hit.

Total drug treatment admissions in the county were up 15 percent as compared to 4 percent in the state and 9 percent in Middlesex. Essex County’s rate of admissions, 136 per 10,000 residents, was below the state rate of 154 but far higher than the Middlesex County rate of 90.